Can Med Comms keep up with the pace of innovation?

Several years ago, we moved to an area of London that was below the flightpath to Heathrow. I remember the summer evening we arrived, sitting among the dozens of packing boxes and listening through the open windows to the sound of one airliner after another making the descent. We noticed that no sooner had the roar of one plane died away than that of the next had begun to build in the distance.

Something similar has become apparent over the past few years in the case of new drugs in oncology.

The intensity of R&D activity and the resulting competitive environment, the access for novel anti-cancer drugs to expedited approval pathways, and in some cases a product’s own life-cycle planning, can often mean that the noise surrounding the introduction of a new therapy might barely have faded, the drug’s role in clinical practice only just have begun to become established, before it’s time to set a new course. When this happens, fresh noise needs to be generated, and now the proposition that needs to be communicated might be radically different from the one that built the launch position.

Remember that new molecular test we encouraged everyone to integrate into the patient pathway? No need for that now.

Remember the mutation we were single-minded in explaining was the novel target for this drug? Well, now we want you to expand your view to consider a broader spectrum.

Although it’s a nice circumstance to be in – rapidly advancing clinical science and burgeoning treatment options are only to be welcomed – the sheer dynamism of the oncology landscape can still seem like a problem from some perspectives.  As well as leaving clinicians – and guideline developers – no doubt feeling a little punch drunk, it presents a challenge for those of us involved in medical communications.

In the past a new drug could be launched with a proposition that might remain relevant for years, allowing the fundamentals of its supporting communications to follow suit. Obviously, situations would evolve and priorities shift, but as with most things, there was generally more time to plan for and execute against these developments in the past than there is today.

The trick of building a new proposition while an existing one has just begun to play is something quite new.

And sadly, there’s no magic we can rely on. 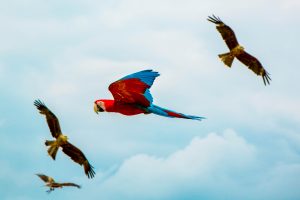 While modern anti-cancer drugs reflect great strides in the underlying science, modern medical communications remains much the same in principle as it was decades ago. Essentially it is still a matter of developing and delivering credible, compelling and consistent messaging that communicates the differentiated value of a product to the stakeholders who will determine the extent of its uptake into clinical practice.

Of course, there are relatively new channels and techniques to employ:

But ultimately, we will only meet the new imperatives for communication created by the pace of innovation in oncology through rigorous planning and a continuing focus on the effectiveness of what we say.

To keep up, we must simply do what we’ve always done, only better.

Meanwhile, back at Heathrow, just last month air traffic controllers made the transition from paper to digital, the first step in a 10-year, £1bn transformation of tools and technology that will ensure they can keep up as flights fill more and more of the sky.

If only something similar was possible in med comms…

If you are looking for clear and consistent medical communications, get in touch with us  and we can have a relaxed chat about your needs and how we can support you.

info@indigomedical.co.uk and ask about our med comms service.

And check out our Medical Communications offering on our website: